Legacies of Empire: The Middle Class, Race, and Party Politics in a Decolonizing State 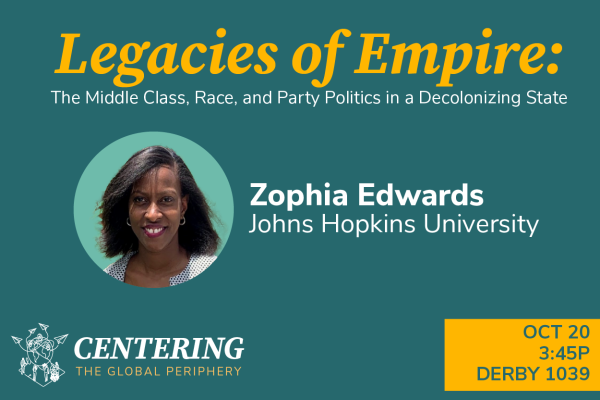 About the work presented by Dr Zophia Edwards:

"Across multiple European colonies in Africa, Asia, and the Caribbean, labor unions and labor movements dominated pre-war politics and movements, pushing not only for better wages and working conditions, but also for decolonization, self-rule, and economic autonomy, indeed a break with European empires. However, in the transition to independence after WWII, capitalist social relations in these countries and relegation to the periphery of the global racial capitalist system prevailed. This work theorizes the survival of racial capitalism and persistence of imperial domination by highlighting the role of the national middle class in seizing the political reins and taking over nationalist movements and post-colonial states. The work focuses on a historical analysis of the former British colony of Trinidad and Tobago, where the pre-war middle class was small and relatively inactive in the politics in the colony, but nevertheless managed to overtake the formidable working class and inherit the newly independent state. By bringing together sociological theories of political parties with anti-colonial thinkers, this analysis centers race and class and colonial domination. I argue that Trinidad and Tobago's African- and Indian-descended middle classes came to power through a set of specific strategies as this class formed political parties and sought to capture state power. By identifying these specific tactics, this work extends sociological theories of party politics and anti-colonial scholarship on the race-class politics of decolonization, while also showing the centrality of the middle class to the survival and reproduction of racial capitalism in the post-war era."

Zophia Edwards is Assistant Professor of Sociology at Johns Hopkins University. Her research examines the impacts of colonialism and multiracial labor movements on state formation and human development in the Global South. Her work has been published in The Sociological Review, Political Power and Social Theory, among others.

This event is co-sponsored by the Center for Latin American Studies and part of the Centering the Global Periphery cluster.