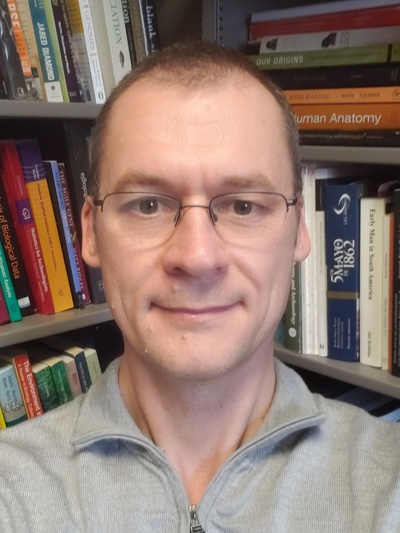 Mark Hubbe's research agenda within skeletal biology has two foci. Primarily, he investigates the processes of morphological adaptation and modern human dispersion with a second research line that examines skeletal measures of health and life-style.

Dr. Hubbe's main research focus has been the study of morphological affinities, processes of morphological adaptation, and modern human dispersion. Most recently, he has been applying similar methods and quantitative analyses to processes of morphological differentiation and modern human dispersion across the planet. They are a result from his well-established networks with researchers in Brazil (Dr. Walter Neves, University of São Paulo) and Germany (Dr. Katerina Harvati, University of Tübingen), networks that could be of great use in training graduate students in similar topics.

Regarding his secondary research focus, life-style and skeletal biology, his work has focused on the influences of prehistoric Andean States (Tiwanaku and Inca) on the life-style of the ancient inhabitants of northern Chile’s San Pedro de Atacama oases (Atacameños). He recently finished a three-year project, funded by the Chilean Science and Technology Foundation (Fondo Nacional de Ciencia y Tecnología), that examined morphological diversity within Atacameño groups and the influence of the Tiwanaku and Inca states on local biological diversity.

His recent publications include “Morphological Variation among Late Holocene Mexicans: Implications for the Discussion about the Human Occupation of the Americas”, American Journal of Physical Anthroplogy; “The Application of 3D Geometric Morphometrics and Laser Surface Scanning to Investigate the Standardization of Cranial Vault Modification in the Andes”, Journal of Archaeological Sciences: Reports (2017); “Eating out or dining in: Modelling diverse dietary strategies in Middle Period San Pedro de Atacama, Chile”,  Archaeological and Anthropological Sciences (2017).